Our purpose is to be a family of love that cooperates with God in making fully devoted fruitful followers of Christ. Watch our welcome video to learn about our campus and connect with us today. 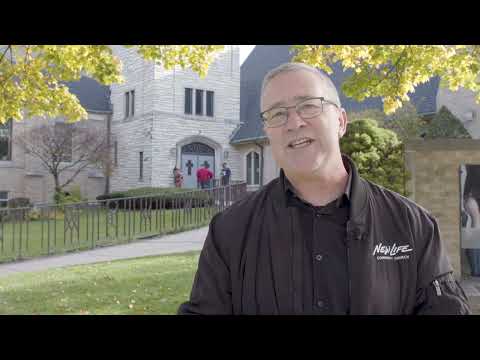 Are you coming for the first time?

We know that showing up to a new place for the first time can be intimidating, but at New Life Community Church it’s our desire that you feel right at home from the moment you pull into the parking lot! As a first-time guest, you are VIP to us so we'll be there with you every step of the way! Asa App grew up in Mexico where his parents are involved in missions work. He met his wife Elizabeth in high school and both of them went on to receive their degrees from Moody Bible Institute, and have now been married for 32 years.  He is currently Lead Pastor at New Life Norwood Park and has served on staff in many different roles including worship leading, youth ministry, raising up a marriage mentoring ministry, mentoring dozens of young leaders, and most recently been involved in church planting with New Life Community Church.  Asa and Elizabeth live on the Northwest side of Chicago and have four adult children. Zachary Adams is native to the San Bernardino Valley of Southern California. He grew up in a big family and was blessed by an even bigger church family that invested heavily in the lives of young people. At the age of 17 he felt called by God to commit to full-time ministry, so he moved to Chicago to attend Moody Bible Institute where he graduated with a B.A. in Biblical Languages. He later graduated with his M.Div from Trinity Evangelical Divinity School. In May of 2020 he married his wife, Victory, whom he’s known since second grade. Zach and Victory live in Jefferson Park and love to serve the community of New Life Norwood Park, particularly through creating a loving youth group community, leading musical worship, and preaching the Word of God. Zach loves to read, watch movies, write, play music, be with friends, and marvel at the wonders of creation (especially birds). Lauren was born and raised in Chicago, IL where her parents have been in missions since she was little. She is currently serving as our Ministry Director for the Norwood Park location. Previously, Lauren lived in Australia working with an organization called Youth With A Mission (YWAM). She served in various capacities of ministry including leading six month intensive discipleship courses with students of all ages, led outreaches to countries around the world, and was involved with teaching and training the staff and students at YWAM. Lauren is very passionate about people understanding and walking in truth, feeling like they belong, and having fun! You can often find her chatting with someone, creating art, or bopping to some good tunes. Traci oversees our children's ministry at New Life Norwood Park. Our Sunday morning Kids Zone is for infants through 6th grade. Traci also has a heart for outreach and organizes several events throughout the year to serve the community and love our neighbors. Kattie began her New Life journey back in 2015 and is currently serving as our Office Manager and Sunday Service Coordinator for Norwood Park. Kattie lives in Chicago with her husband and their two children. She loves reading, journaling, and enjoying the beautiful outdoors with her family. She also loves the liberating truth and wisdom of God’s word. She hopes that her stories will stir people's hearts, strengthen their faith, and encourage them on their journey. You can often find her enjoying conversations with people over a good cup of coffee or a home-cooked meal.